Carnival is for sure one of the most important Venice Traditional Events:  it means transgression, culture, tradition, art and history. 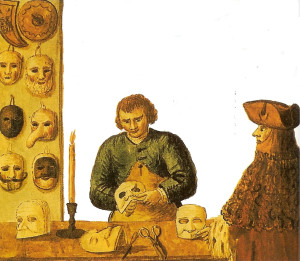 Carnival has its roots in Greek and Roman times, and it was related to the feasts of the Cult of the Dionysus and to the Latin Saturnalia, celebrating the end of Winter. In Christianity it became a period of merrymaking before Lent fast.
In Venice Carnival began on Boxing Day, December 26, and reached its climax the day before Ash Wednesday. While it lasted, the law was for more or less held in abeyance: the wearing of masks and disguises abolished social divisions of the duration.
The 18th C. historian and art critic Marcel Brion left an interesting description of Carnival:
“The carnival opened on the first Sunday in October and went on until Lent. In other words, for six months every year the people abandoned their regular avocations, and, protected by the anonymity of the mask, threw themselves into the light- hearted pastimes which immediately became their main preoccupation”

The period of Carnival was rich in public festivities and private parties, street entertainments, shows and general merrymaking. Theatres were all involved to offer the richest program in Europe.;

In the last 30 years Carnival in Venice has been re-established and recreates the atmosphere of the glorious past.
Masks have reappeared, and 18th century garments and traditional costumes again mingle with other grotesque disguises. The old custom of giving balls and theatrical shows has been revived, along with an array of ancient Venetian games.

Every year a different a subject is chosen and the main events are tailor on this traditional main topic.
Residents and tourist both enjoy taking part and you can find a variety of events throughout the City, though the hub remains St. Mark’s Square.

The city teems with people wearing the most imaginative masks, happily crowding the streets and the Venetian campi (squares), having fun and trying to get noticed, maybe hoping to appear on the next-year calendar.

Venetian Frittelle. With Carnival Coffee houses and pastry shops turn out freshly made Frittelle and Galani, the traditional sweets, symbols of the Venetian Carnival. 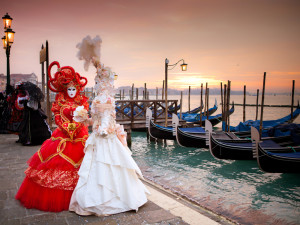 sk-making was very popular in the past as it is today: the use of masks in Venice was so widespread that the mask-makers had their own official artisan status as early as the 15th cent.

Tabarro and
Bauta: the Bauta was composed of a black silk hood and a lace cape; the costume was completed by a voluminous cloak (Tabarro) and a three-cornered hat. Wearing a bauta, a tabarro and a white mask covering most of the face, one could go anywhere completely incognito.

The First Sunday after Ascension Day 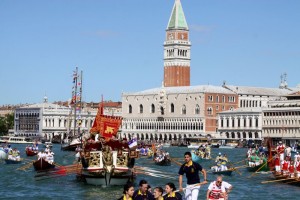 Among Venice Traditional Events, one of the most spectacular is the Regatta organized for the Ascension Day. In the old times this festivity held an important role in the social and political life of Venice, and was probably the most important and sumptuous ceremony for the City, since it celebrated the Venetian sea-power. The Marriage of Venice with the Sea drew huge crowds since the Feast was established, back in the 11 th century.

Every year the Doge aboard the Bucintoro – the sumptuous state barge – along with the noble, the clergy the foreign ambassadors sailed for the port of San Nicolò at the Lido, followed by a procession of boats and gondolas and having arrived at the mouth, the Doge cast a ring into the sea and pronounced the words “We wed thee, sea, in token of our perpetual rule”. With this symbolic official ceremony a series of festivities began on the Lido and went on for 15 days.
And this is a festival we still celebrate the very same way, with the mayor instead of the doge, and without the Bucintoro – for the last one was destroyed by Napoleon.

The Third Sunday of July 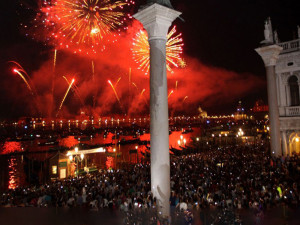 The Redentore Feast commemorates the end of a devastating epidemic of black plague, which in 1576 carried off a third of the Venetian population. The Government decided to make a vow to Christ the Redeemer, promising to erect a Church if the plague ceased.
The church was erected by the famous Architect Andrea Palladio, and each year the day was to be celebrated on the third Sunday of July. A pontoon bridge had to be constructed to allow the large procession of people to flock from one side to the other. A night’s vigil had to precede the Festa. The vigil, however, did not take place in churches or homes but in boats, any kind of boat, all covered with branches, lanterns and decorations and moored along the Giudecca Canal.

The vigil was well supplemented with food and wine and the eating and drinking went on and on, a kind of water-picnic. Those that could not spend the night on a boat, crowded the quayside of the Giudecca in an endless line of laid tables.

Now we have used the past tense here, but the festival is still celebrated the very same way and it is the most spectacular, typically Venetian festival. The firework display is just breathtaking: the fires set off from barges in St. Mark’s basin, going off right above your head: a play of lights and reflections producing a kaleidoscope of colors with the with the incomparable backdrop of St Mark’s Square. One of the most fascinating and  peculiar Venice Traditional Events you can see in Venice

Every year from springtime to fall over one hundred regattas are organized in Venice and its Lagoon. Many of these races are spontaneous events held by the several Rowers’ Associations of the City; some are promoted by the City of Venice, and together with the Rowing Clubs many efforts are made in order to support the rowing sporting practice which is related to nature of the city itself.

Traditional festivities and festivals are often taking place together with the boat races, just like in the past times when the race was an occasion for celebrating the glory of the Venetian State. 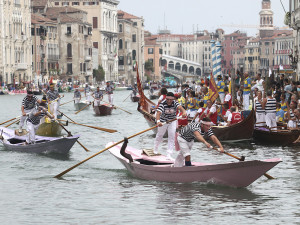 The most important boat race in Venice is the so called Historical Regatta. The event is one of the grandest ceremonies we still celebrate every year on the first Sunday of September.

The Feast celebrates a very important historical event which took place back in the 15 th century. The Republic of Venice arranged in fact the marriage of the beautiful 14 year-old Caterina Corner to King James of Cyprus.

Caterina was formally adopted as daughter of the Republic and then shipped to Cyprus. When James died about a year later (how strange!), the Republic decided that this beloved daughter had better abdicate in favor of her adopted mother, the Republic. In October 1488 in fact Cyprus was formally incorporated in the Venetian Sea-State and its Queen shipped back to Venice.

The doge even sailed out in his state barge to greet her. A stately procession up the Grand Canal then followed: a memento of all the pomp and pageantry the Venetians loved so much.

Even now the Regata Storica is one of the most spectacular, picturesque and moving Venice Traditional Events, capable of both charming tourists and exciting the locals.