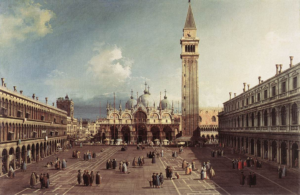 Saint Mark’s Square is undeniably the peerless entrée to Venice and the core of the millenarian Venetian civilization. This mythical place is the main representative of Venetian history and culture. Saint Mark’s square was the institutional center of the highest offices of the State, in which political and religious power were welded in the figure of the doge (duke) and in the icon of the Basilica of Saint Mark, the ducal chapel. 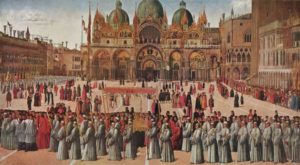 Procession in the Square of Saint Mark by Gentile Bellini (1496)

The Square is an impressive urban space of trapezoidal dimensions covering 12,128 mt2/130,540 ft2. It is bordered by the most famous buildings of the City, highlights of Venice’s glorious past, which provide an unforgettable impression at first sight.

The beautiful architectures surrounding the Square are remarkable not only for their peculiar solutions to the technical problems of building in a swampy environment. They also represent artistic achievements of the highest level, and ideas brought in from outside which were turned into a unique and peculiarly Venetian style. 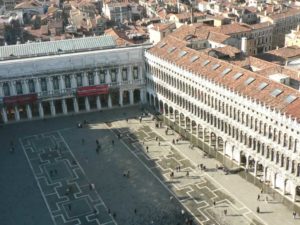 Saint Mark’s Square has always been the mirror of the city’s political and religious mentality, and has provided a majestic setting for the sumptuous public ceremonies and splendid long processions, held throughout Venice’s history, staged to impress inhabitants as well as foreign diplomatic dignitaries and merchant from overseas, where Art was used as tool to promote and highlight the glory of Venice.

There is only one Square or Piazza in Venice as all the other squares, apart from their size, are called “campo”. The long and spectacular transformation of the Square and the surrounding areas begun in the early 9th C, when the first Doge’s Palace was built. In the late 12th C, at the time of Doge Sebastiano Ziani, when a canal (Rio Batario) was filled in and the Square reached almost the present extension, though a period of great urban renewal started at the end of the 15th C.