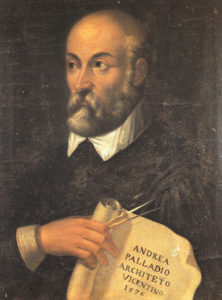 Andrea Palladio is probably the most famous architect in the Western world. His buildings and his writings have influenced the course of architecture from the 16th century onwards. He is still very popular today, due to the accessibility of his buildings preserved in Northern Italy, the beautiful landscapes in which they are located and the conservation status of many of them. 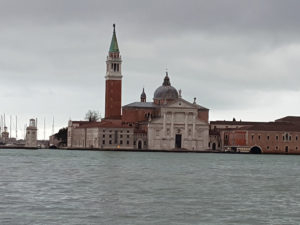 You feel a deep emotion in “discovering” one of his palaces in a narrow street of Vicenza, or coming across one of his villas situated in the Veneto countryside, or even coming out from the winding streets of Venice that lead to Piazza San Marco and see, beyond the blue waters of the lagoon, the white stones of the church of Saint George.

The quality of Palladian buildings has turned them into remarkable models of a particular architectural approach, the so called all’antica design, in which Palladio excelled.

It is said that the Florentine humanist Poggio Bracciolini discovered, probably in the library of St. Gall Abbey in Switzerland, a copy of the old book De architectura, kept in much better conditions than any other copy known at the time. The text, written between 30 and 15 BC by the Roman architect Marcus Vitruvius Pollio, was the main introduction to the all’antica theory.

Vitruvius had argued that the study and imitation of nature were the most important goals for an architect, since Nature leads to Beauty, which is essential to architecture once the building has achieved other purposes, namely Utilitiy and Force.

These three criteria, utilitas, firmitas and venustas (commodity (utilitas), firmness (firmitas) and delight (venustas)) had to be pursued by applying strict laws learned from Nature: every aspect of the architectural work was to be controlled by rational principles. 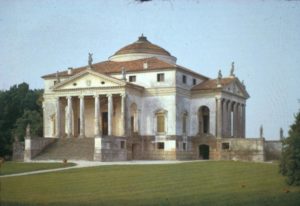 Palladio started heading this direction when his talent as a stonecutter was recognized and supported by some noblemen of the Republic of Venice, who lived near Vicenza. The experience he managed to gather allowed him to consolidate his interpretation of the classic style over the years. His projects, while following the strict canons of classical language [propriety (decor), symmetry (symmetria), proportion (eurythmia) and economy (distributio)] which are imbued with their own humanity, details and materials harmonized with the rural landscape and contribute to improve the quality of civic life so incisively that they became the source of inspiration for fans of the theories presented by Palladio.

Palladio’s followers were many, and famous almost as much as him. They followed his example as they shared the same devotion to the classic and natural principles: a philosophy of life which permeated their architectural projects. 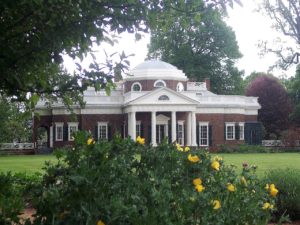 Many artists of the time are still quite renowned in the field of architecture, though none of them is as famous as Palladio. His works were not only appreciated at his time, but also by later generations, and, quite unusually, he has inspired a movement: the “Palladian School”,

which supported his peculiar pursuit of classic beauty in architecture.

Palladio’s drawings, especially those contained in his Four Books of Architecture, published in 1570, were the most important legacy of his “modern” classicism and the basis for the “Palladian Movement”.

As the enthusiasm for his architecture increased,  translations of his texts and engravings of his projects became available.

Palladio had many followers in the British and American world, who explored the architectural theory they shared following various interpretations: Inigo Jones – the first of the great English Palladian architect – early 17th century, Lord Burlington, about a hundred years later, and Thomas Jefferson, the last of the “Anglo-Palladian” great architect in America (around 1800). These architects revolutionized the practice of architecture in their time making the improvement of the society their primary goal.